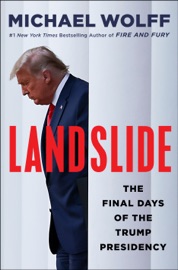 New York Times bestselling author of Fire and Fury and Siege completes the trilogy on the epic presidency of Donald J. Trump

With Fire and Fury Wolff defined the first phase of the Trump administration; in Siege he wrote an explosive account of a presidency under fire. In Landslide Wolff closes the story of Trump’s four years in office and his tumultuous last months at the helm of the country, based on Wolff’s extraordinary access to White House aides and to the former president himself, yielding a wealth of new information and insights about what really happened inside the highest office in the land, and the world.